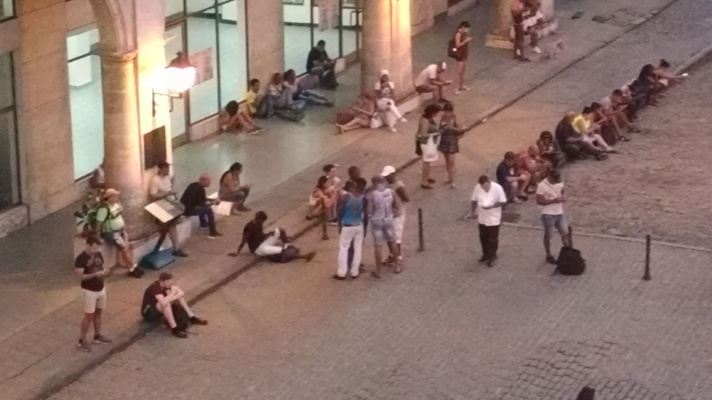 Cuba is a mind bending experience. Havana is at once a beautiful city and a place that is falling apart.  Its people are at once still suffering from the “special period” of economic devastation that followed the collapse of the Soviet Union and the US embargo and climbing into a brighter new day of world class art, biotechnology and even private enterprise.

Founded in 1513, Havana has magnificent examples of 16th, 17th, 18th and 19th century architecture in the old city. There are splendid residential boulevards from the early to mid 20th century and finally really ugly high rise examples of “Soviet architecture”. All of it is crumbling because there has been virtually no capital for maintenance and investment since the revolution started in the late 1950’s.  There are families living in most of these crumbling buildings  because when they were seized by the government after the revolution, the fancy buildings were divided up and assigned to families from the countryside or city who fought in the revolution. In this Communist society, 70% of the people own their home. It may be tiny and look live a hovel to a visitor, but the residents can sell it for cash—part at an official price and most at a black market price that seems to be ignored by the government.  (There is a huge black market for almost anything in Cuba.) If you own your building, you can use it for one of the newly permitted areas of private enterprise, for example a restaurant. More than 500 new restaurants have opened in Havana in the last year or two. (Some of them are quite good.) They cater largely to the rapidly growing tourist trade. These buildings have been extensively renovated but might be next to one that is falling down. The restaurants must be owned and operated by Cubans but the capital for them seems to be coming from relatives in the States or investors in other countries.

Grand buildings in old Havana are also being restored one by one by the Office of the City Historian. Its director figured out how to run highly profitable tourist businesses that generate capital for investment in both more tourism and renovated housing for people who live in some of the crumbling buildings. The military also runs a profitable tourist business and seems to have muscled its way into controlling the tourism businesses of the Office of the City Historian.

Cuba imports about 80% of what it consumes, including food and other essential elements of life. Its economy was almost totally dependent on the Soviet Union and Venezuela trading sugar for almost everything else from the Soviet Union, and doctors for oil from Venezuela. When the Soviet Union collapsed and the US government increased its sanctions and embargo to try to force regime change, Cuba entered a “special period” of severe deprivation of near starvation. Many thousands escaped to the US and elsewhere but those who remained developed resilience skills that are remarkable. The regime slowly began to find ways around the draconian US policies that force them to pay higher than market prices in cash for everything they need to import.

Fidel and Raul Castro remained determined not to undermine the principles of their revolution but realized they had to bring in some external capital to restart the economy. They placed a big bet on tourism and limited openings for private enterprise by Cubans to support tourism. Now the regime seems to be simultaneously doubling down on expanding tourism while trying to contain the growing gap in income and living conditions for the winners in the new economy: the restaurant owners and workers, tour guides and artists with access to a world market in dollars.

The internet and cell phones came late to Cuba. There is virtually no internet availability in homes.  Wifi hot spots exist throughout the city. The attached picture shows one outside a library across the street from our hotel. Almost all the young people we saw had smart phones often received as gifts from relatives in the States. Many sites remain blocked and anyone launching a website that the government deems objectionable is quickly arrested.  (One of the economists we talked with told us there is no shortage of outside information because anything that is formally blocked is being quietly circulated on thumb drives.)There is a palpable sense that a genie has been let out of a bottle and it will not be put back. Many of the young people we talked with told us they “want to be around for the change” so they are opting to stay in Cuba and not emigrate to Latin America, Europe or the States. Others are still planning to leave as soon as they can. Many Cubans still rely heavily for cash and goods from relatives and friends in the States because the economy still doesn’t work well enough to generate real incomes and the necessities of life.

A wifi hotspot, any time of day or night.